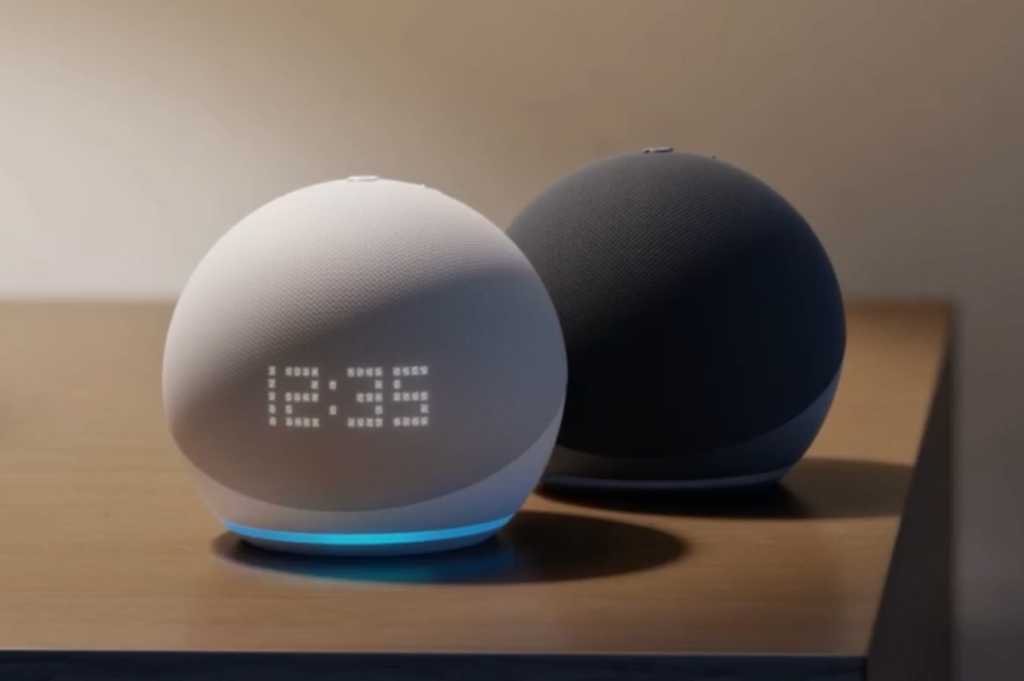 Even better, fourth-gen or better Echo devices are about to become Eero Wi-Fi extenders, Amazon said, while the Echo Studio is slated to a software update that improves the speaker’s spatial audio technology.

The latest Echo Dot comes with the same external design as the previous-gen Dot, but Amazon says it redesigned the interior to accommodate a larger speaker that delivers “clear vocals” and up to twice the bass response, making it–according to Amazon–the “best-sounding Echo Dot ever” (not a high bar to clear, admittedly).

Meanwhile, the refreshed Echo Dot with Clock will arrive with new “high-density dot” technology that allows its display to show information such as artist names, song titles, and (eventually) calendar events.

Besides the hardware upgrades, Amazon announced that a range of Echo devices will soon act as extenders for Amazon’s Eero mesh Wi-Fi routers.

Both the new Echo Dot and Echo Dot with Clock will come with Eero True Mesh technology, allowing them to extend the range of Eero mesh routers by up to 1,000 feet and supporting speeds up to 100 Mbps.

Besides the new Echo Dots, an upcoming software update will turn existing fourth-gen Echo speakers into Eero range extenders, too.

Echo Studio will get a spatial-audio update

The three-year-old Echo Studio, the only Echo speaker capable of immersive Dolby Atmos audio, is about to get a free update that will boost its spatial-audio capabilities.

The update (which will “automatically roll out” to Echo Studio speakers) will offer new, “custom-built” spatial audio processing that’s designed to boost stereo sound as well as delivering better “clarity and presense.”

Amazon says the Echo Studio update will also improve the mid-range while deepening the bass.

Aside from the update, Amazon unveiled a new “glacier white” flavor of the Echo Studio, which is slated to ship next month for $199.99.

The new designs come with a year’s worth of Amazon Kids+, same as the original Echo Dot Kids speakers, and will be available for $59.99 each next month.