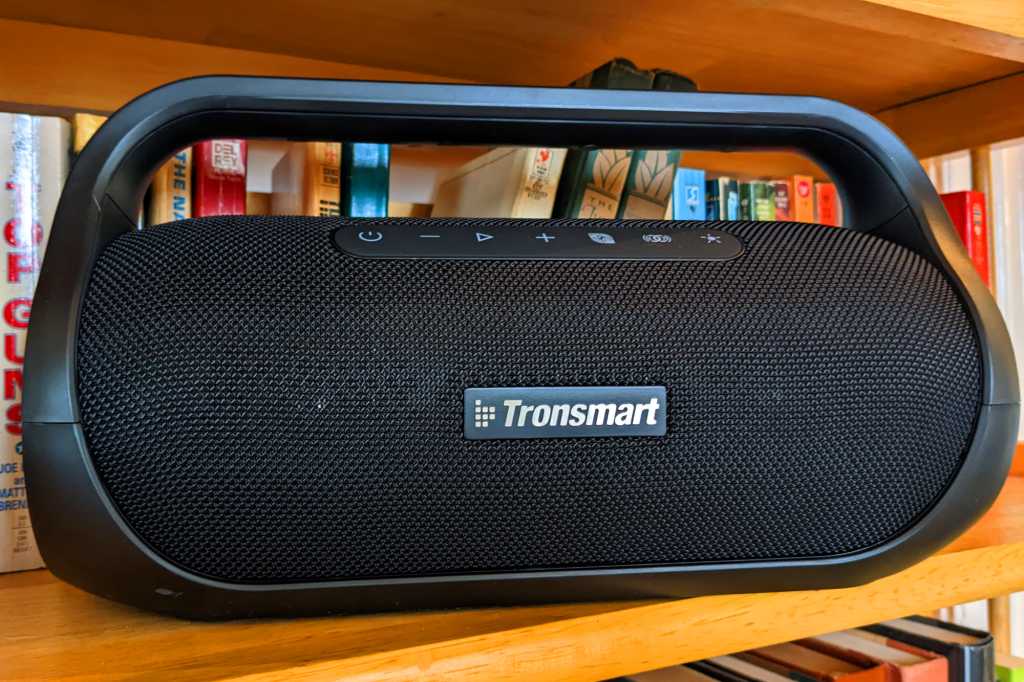 Jon L. Jacobi
At a glance

This thumpy, good-sounding speaker is also rugged, water resistant, can be paired via TWS, and is more affordable than the name-brand competition.

Tronsmart is a bargain brand in the truest sense of the phrase; i.e., the company’s speakers are sonically competitive, but generally priced well below the competition from better-known brands. That’s true for the $90 Bang Mini reviewed here, although the sound wasn’t quite as impressive as it was with the last couple of Tronsmart products we’ve reviewed.

That said, the Bang Mini supports TWS (True Wireless Stereo), so you can grab two and pair them in stereo for almost what a single similar speaker from a name-brand competitor will set you back. And separated stereo trumps a five-percent-difference in single-speaker audio quality nearly every time.

The Bang Mini is a mid-sized party speaker with an integrated handle. Obviously, with Mini in the moniker, it’s a smaller version of the full-sized Bang party speaker we reviewed earlier in 2022. Measuring 6.8 x 11.9 x x 4.9 inches (HxWxD), including its handle, the Bang Mini will easily fit in a backpack, though being tubular with said large handle, it might feel a bit lumpy.

The speaker weighs in at 5.22 pounds, so you’ll know it’s there, even if it’s not a huge burden. The heft is indicative of a solid chassis and a design that’s IPX6 rated to withstand the elements (water without submersion). You’ll find everything you need to know about IP codes at the preceding link.

A Class D amplifier provides 50 watts total power to the two front-facing tweeters and two front-facing woofers. The battery is said to power the unit for up to 15 hours sans the ring lighting surrounding the passive radiators on each end of the unit, and 13 hours with them flashing. The passive radiators contribute a great deal to the nice amount of thump the Bang Mini generates.

The controls sit on the upper portion of the speaker grill on the front of the unit and consist of the on/off, minus (previous track/volume down), play, plus (next track/volume up), SoundPulse EQ (bass-y/not so bass-y sound), stereo link (TWS), and a light show control button. Most of the buttons are multi-purpose and can be used to control tracks on the streaming device, handle phone calls, pair with Bluetooth devices, and so on.

On the lower back of the Bang Mini you’ll find a rather thick, two-inch long, rubberized plug covering the ports, which include: USB-A for charging other devices; 3.5mm auxiliary (analog) audio input; microSD/TF card slot; and USB-C for charging the Bang Mini’s battery.

If you’re not familiar with the memory card slot, it lets you create and play your own audio playlists (stored on a flash-memory card) to avoid some of the pitfalls of Bluetooth (which is 5.3, by the way), such as running down your phone’s battery, or a heated debate over whose streaming feed is most appropriate for the event.

My only design complaint is that the captive weatherproofing plug extends only about half an inch, consequently blocking one or other of the ports (the USB-C port is hidden in the image above). It’s workable, but a slightly longer tether would eliminate the problem.

Another slight disappointment is that the Tronsmart app doesn’t currently support the Bang Mini, only the full-sized Bang (and a couple of other Tronsmart models.) That means there’s no way to adjust the speaker’s EQ settings or to otherwise configure the speaker using your smartphone or tablet–at least for now.

The very first thing I noticed upon listening was that the Bang Mini pumps out a lot of bass. The low frequencies aren’t overwhelming, but you’ll definitely know they’re there. It’s also a speaker that sounds better when you put a little distance between your ears and the box. Place it close to you on a desk, and its somewhat directional nature comes into effect.

I found myself fiddling with the Bang Mini’s orientation a lot under those circumstances, which makes perfect sense as it’s meant for use at gatherings, not fine listening by individuals in contemplation. It’s actually fine for the latter; just set it back a couple of feet.

Overall, as I’ve already mentioned, there’s plenty of bass to be had, and I found the high-end frequency response more than adequate. I wasn’t completely enthralled, however, with the mid-range reproduction, which was a tad lacking in definition. Certainly not the point of breaking the deal, but I’d have liked a bit more punch and clarity in those frequencies.

The Bang Mini also sounds a lot better paired with another of the same ilk in stereo. Tronsmart was smart and sent me two for listening. It makes a huge difference simply because of the separation of the stereo signal.

Battery life appears to be approximately what Tronsmart claims. I was at six hours (light-show engaged) and counting with plenty of juice left.

The Tronsmart Bang Mini is a very good deal

As I said up top, the Bang Mini is good deal, and significantly smaller and easier to carry than the full-sized Bang. It’s sonically competent and sounds great paired with another Bang Mini. And at $90, it’s priced like an off-brand product–a category that no longer includes Tronsmart by our lights.