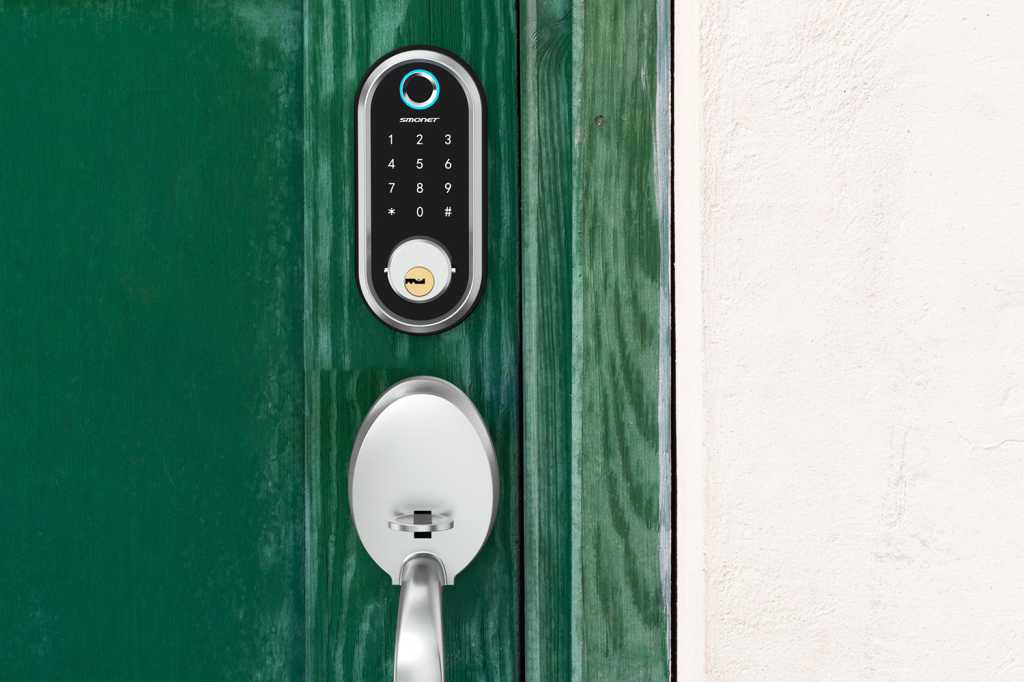 Smonet
At a glance

If you’re willing to get in the weeds a bit, Smonet’s smart deadbolt is a reasonable and affordable Bluetooth lock with a Wi-Fi option.

Smonet isn’t a household name, but I was surprised to find that the company offers more than a dozen smart locks, in addition to cameras and other home security products.

The Smonet SMUS-GS002, a relatively uninspired 2.5 pounds of metal and black plastic, offers something of a greatest hits from the company’s smart-lock playbook, providing its most essential features without breaking the bank. The lock is Bluetooth-only out of the gate—Smonet’s optional hub ($39.99) lets you bridge it to Wi-Fi—but the bevy of access method options include a numeric keypad (the lock can store up to 300 PINs), fingerprint recognition (up to 250 prints), a physical key, and an IC (aka RFID) fob. All that is in addition to being able to use your phone to open the door.

This review is part of TechHive’s in-depth coverage of the best smart locks.

You’ll need to physically install the lock first, of course, and that can be a bit more challenging with Smonet than with competing products. Part of the issue is the manual, which isn’t wholly accurate and has some translation challenges to boot. The design of the lock is traditional—there are two escutcheons, with a mounting plate for the inside of the door and to which the interior escutcheon is connected, but it’s unclear which bolts go where. There’s no indication of how to tell the difference between screw I vs. screw K vs. screw L—even if the manual had them labeled properly.

You’re also encouraged to drill a small, additional support hole above your primary borehole to better support the lock and keep it from listing—a drill bit and screwdriver are both included—but that that step is optional. I didn’t drill it and the lock stayed steady and in place throughout my testing. While the instructions are lacking, a little trial and error (on top of a lot of experience working with locks like these) was all that it took to get things up and running within about 15 minutes of effort.

The lock is powered by four AA batteries (which are not included) and there’s a micro-USB backup port on the underside of the exterior escutcheon in case the batteries should unexpectedly fail ahead of the six months of promised battery life.

Smonet says you can use your choice of two apps—TTLock or Next Lock—to work with the system. These are available on both Google and iOS platforms; I chose the former for my testing. TTLock isn’t the most exciting app from a design standpoint, but it does put all its key features in easy reach. No matter what you are setting up—app-based access (called eKeys here), PINs, fingerprints, or IC card access—the options are easy to find. They all can be configured for permanent access, time-restricted, or recurring access (such as someone who needs access to the house every Monday from 9 to 5).

PIN and eKey access can also be configured for one-time-only access. I encountered no trouble with any of these options, finding the Bluetooth connection responsive, the fingerprint reader on point, and the keypad easy to work with. Even the IC cards (two are included) are simple to register and work with. The biggest catch I ran into: You’ll need to read up in the manual to figure out that you must push the # key to open the lock after entering a PIN, and hold down the # key for two seconds to lock it back up from the outside.

Settings options are modest but get the job done. Notably, an easy, tweakable auto-lock system is included. A door open/close sensor solution is mentioned, but this requires an external sensor which Smonet doesn’t appear to sell. (Perhaps this option is available only for locks of other brands.)

Aside from what I mentioned above, the only features I didn’t really love were fairly minor: You can’t set your own PIN codes; the app generates them for you and they’re all 8 digits long. The logging system updates slowly and prioritizes app-based interactions. If you unlock the door with a fingerprint and later lock it with the app, the app will show the app activity before the fingerprint activity shows up (which usually only happens after another app-based interaction). Finally, the keyhole is covered by a metal plate that must be pried off (permanently, I suspect, in most cases).

Of course, the biggest drawback is that the unit lacks Wi-Fi, which means it can only be managed when you’re within close range, and it can’t connect to third-party devices like Alexa or Google Home without the previously mentioned $40 bridge. That said, the $150 price tag is compelling, and the locks is a decent option for smart home tinkerers who are willing to get their hands dirty with a little trial and error.