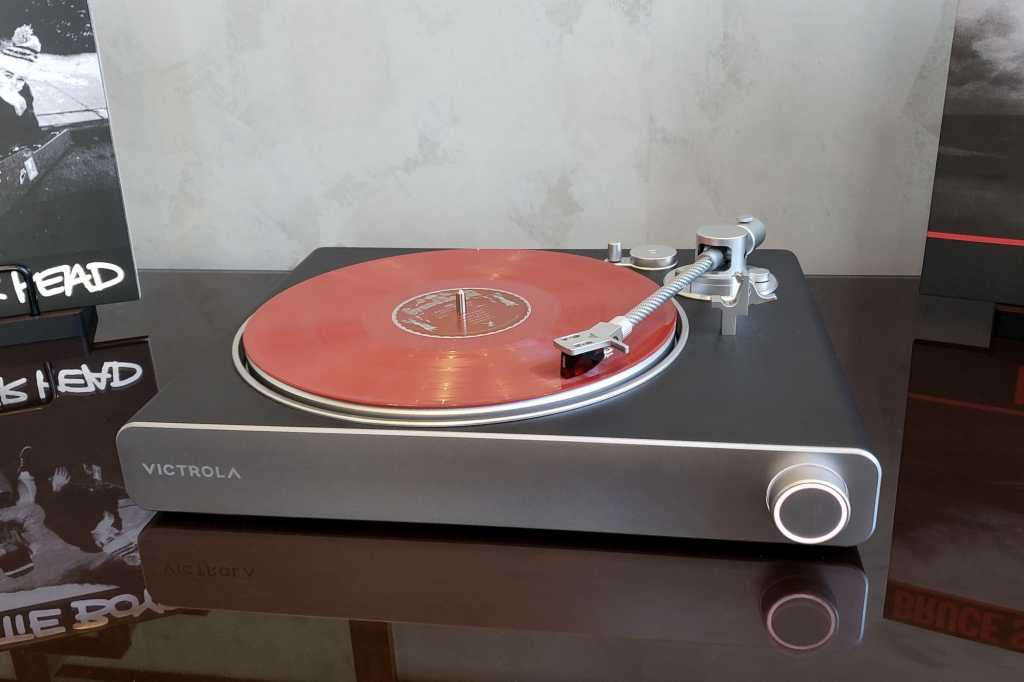 Of all the ways to connect a turntable to a home’s worth of Sonos wireless audio gear, Victrola’s new Stream Carbon must be the easiest. This innovative $800 record player (Victrola’s model number VPT-3000) is outfitted with its own pre-amp and a Wi-Fi module that connects directly to wireless Sonos components, making a whole-home stereo setup quick and simple.

A certified “Works with Sonos” device, the Stream Carbon streams music to Sonos speakers over either Wi-Fi 5 (2.4- or 5GHz, but not the newer and faster 6GHz band) or an ethernet cable (up to 100Mbps). For analog traditionalists, the unit has RCA outs for use with an old-school amplifier.

The Victrola Stream Carbon is a major step up from Victrola’s previous offerings. We’ve evaluated several of the company’s turntables recently, but none have wowed us. This belt-drive model with a sturdy steel frame, an MDF plinth, a die-cast aluminum platter, and recessed 2-inch vibration-damping feet could be a different story.

It’s outfitted with an 8.9-inch carbon-fiber tonearm with a tracking error of less than two degrees, and it comes with a removable headshell and an Ortofon 2M Red cartridge. It has a tracking force of 1.8-grams and frequency response from 20 to 20,000 Hertz. It can spin at 33 1/3 or 45 rpm and comes with a machined adapter for 45s.

The sleek silver and black turntable comes with a black dust cover to shield the platter and tonearm, but the cover can’t be used while you’re playing a record. Its single knob is backlit by LEDs and can act as a master volume control for all connected Sonos speakers. You can also use the Sonos app to adjust the volume and bass and treble levels.

Victrola demoed the turntable for the assembled press in a Manhattan apartment, with the turntable connected to nearby Sonos products as well as speakers in the kitchen, an upstairs bedroom, and a TV soundbar. Overall, its audio output was clear and clean, with no hum or rumble and sounded just as good with the Beastie Boys as with Bruce Springsteen. The turntable-Sonos pairing would have better suited my listening tastes if it had some deeper midrange tones, but don’t consider this a review.

The Victrola Stream Carbon is available for pre-order now, with a manufacturer’s list price of $799.99. For it to catch on, the Stream Carbon doesn’t need to be the best-sounding turntable, just the easiest to use. TechHive will publish an in-depth review as soon as we receive an eval unit.