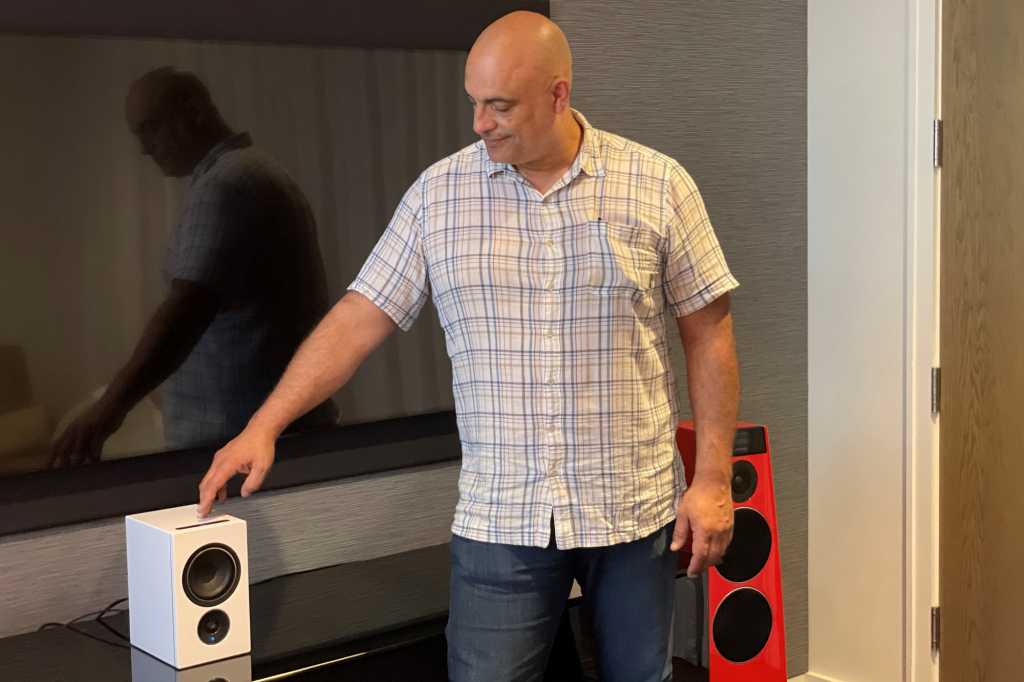 Just-turned-50-year-old PSB Speakers has set its sights on the future with the Alpha iQ, the maker’s first powered speakers packing onboard high-resolution network streaming, plus a host of other connectivity options. It all comes in a compact, robust-sounding form factor that’s easy to set up and use, one “that doesn’t take a four-year college physics degree to operate,” according to product manager Joe de Jesus.

Arriving two years after PSB’s well-received AM5 and AM3 powered speakers (which lack onboard internet connectivity), the Alpha iQ utilizes drivers similarly sized to those of the AM3, but with much more powerful (and now bifurcated) amplification: Each side of the stereo pair has one 4-inch polypropylene bass driver powered by a 60-watt Class D amplifier, and one 0.75-inch aluminum dome tweeter driven by 30-watt Class D amp.

All this is inside thoughtfully braced cabinets with well-tuned ports, helped by a little DSP magic and the golden-ears mindset of company founder and chief designer Paul Barton. “Paul still does the bulk of speaker voicing,” said de Jesus (pictured up top during our demo), “but [he] now has a crew of engineers to help him.”

Buyers will also get refined connection options. The set offers two-way Bluetooth with support for the aptX HD codec. Users likewise can listen privately by streaming music from the speaker set to Bluetooth headphones.

Apple AirPlay2 compatibility enables CD-grade music streaming from apps on an iPhone, iPad, or Mac. Spotify Connect and Tidal Connect are supported for queuing up music those services’ respective apps. In need of a TV sound upgrade? The Alpha iQ can handle that, too, through its HDMI eARC input, with the ability to control volume levels using the TV’s remote.

The dedicated BluOS controller app runs the show on a smartphone, tablet, or personal computer. A touch panel atop the primary speaker likewise enables pause/play and volume adjustment. Limited voice controls also can be barked, but only to an external device running on Amazon Alexa, Google Assistant, or Apple Siri (via AirPlay 2.)

Vinyl lovers will appreciate the rare (among streaming speakers, at least) inclusion of a moving-magnet phono input, so they can plug in their favorite turntables. That eliminates the need for a turntable with an onboard pre-amp, or a pricey outboard pre-amp to listen to LPs. Rounding out the ports on the primary speaker’s backplate: Optical and analog aux inputs, a LAN/USB port for either hardwired ethernet or mass storage, and a subwoofer output.

I’m thinking there won’t be much of a need for that last connection. During an admittedly brief listening test with HD tracks from Johnny Cash, Steely Dan, and Aimee Mann, I noted very lively, well-balanced musical performances with excellent detail and a goodly amount of bass extension—even at low listening levels.

We’ll have an in-depth PSB Speakers Alpha iQ review as soon as we get our hands on an eval unit.