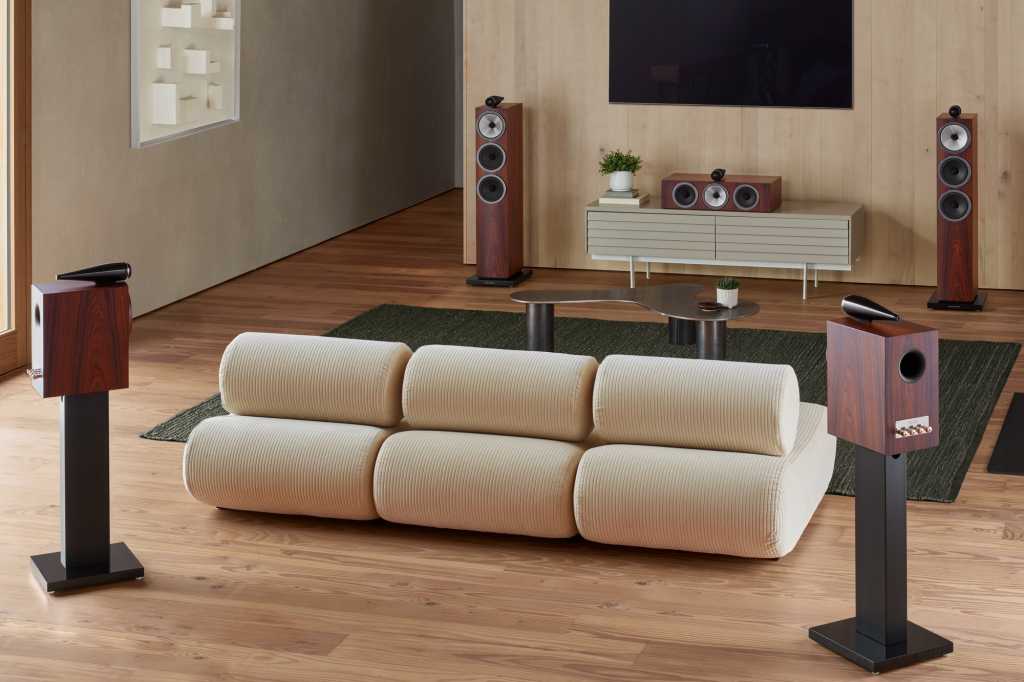 Renowned British audio manufacturer Bowers & Wilkins has announced an entire refresh of its 700 Series floorstanding, bookshelf, and center-channel speaker lineup. A three-year development cycle has resulted in much of the technology originally developed for the brand’s flagship 800 Series Diamond speakers trickling down to a line that costs a whole lot less; well, relatively so.

The 700 Series features eight new models: three floorstanders, three bookshelf models with optional stands, and two center channels for home-theater deployments, including one with a tweeter-on-top diaphragm. B&W is also introducing a new color option—a woodgrain “mocha”—that will join the gloss black and satin white finishes previously offered. A “rosenut” finish will also be available, but only in Asian and Pacific markets. The photo up top shows the 703 S3 floorstanders and HTM72 S3 center channel in front, with the 705 S3 bookshelf speakers mounted on their optional stands functioning as surround speakers.

The new 700 Series’ cabinets are slimmer than previous generations and boast a curved front baffle with drive units that are mounted in external pods, one of the several design features originally developed for the 800 Series Diamond. B&W says this minimizes the ‘cabinet diffraction’ effect, helping the speakers acoustically disappear so you can concentrate on the music.

Across the board, new 700 Series speakers will be outfitted with B&W’s Carbon Dome tweeters coupled to improved voice coils with new upgraded magnets and longer tubes to reduce resonant frequencies. Floorstanding models 702-S3 (a 3-way speaker with dual Continuum mid-range drivers, $7,000 a pair) and 703-S3 (a 3-way speaker with a single mid-range driver, $6,000 a pair), bookshelf model 705-S3 (a two-way speaker, $3,400 a pair), and center channel model HTM71-S3, $2,500) get the tweeter-on-top treatment. The top-of-the-line 702-S3 floor-stander also features a down-firing port, which is less likely to reflect sound off nearby walls.

Machined from a solid block of aluminum, B&W says its tweeter-on-top enclosure has been significantly lengthened to further reduce distortion, assisted by an improved two-point decoupling design to isolate the assembly from the cabinet and produce a more open soundstage. These tweeters will be offered in either a dark anodized finish to match dark cabinet finishes, or light anodized finish for satin white cabinets.

In a briefing ahead of the announcement, B&W’s director of product marketing, Andy Kerr, said “Having the tweeter on top in the center channel is a big step forward, but that design won’t work for everyone. If you’re putting the speaker inside a piece of furniture, for instance, you’ll be limited in terms of height.”

Bowers & Wilkins says all of the new speakers in the 700 Series lineup should be available for purchase now. During our briefing, Kerr said “there will also be in-wall and in-ceiling models, with optional subwoofers, for things like Dolby Atmos.”