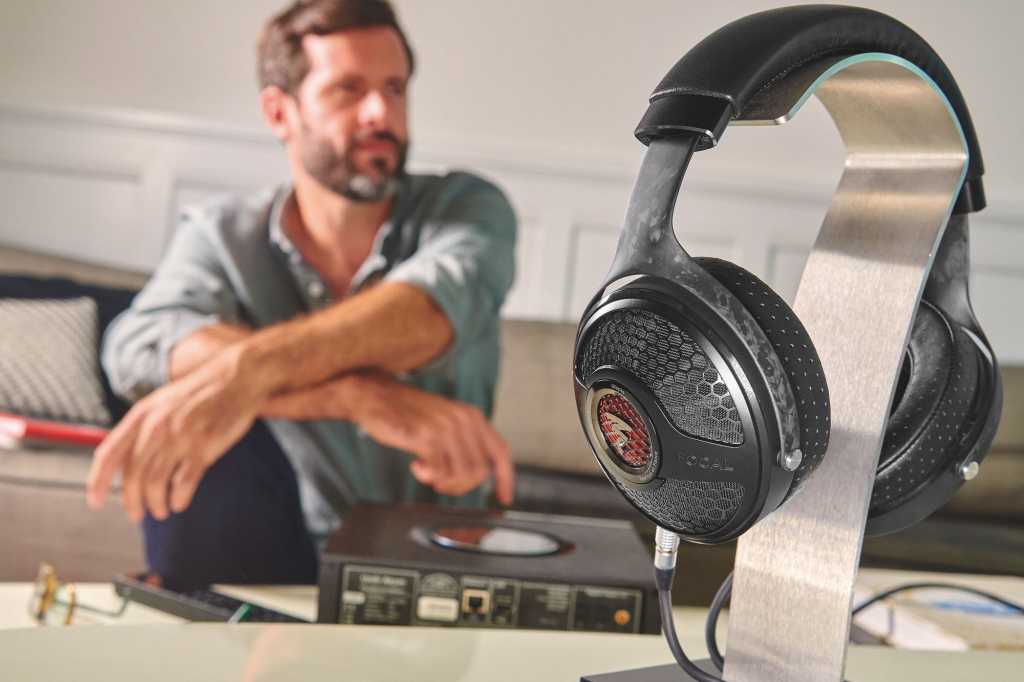 The Focal Utopia will reveal details of your favorite records you’ve never been able to hear with lesser gear. This is an audiophile headphone that justifies its high cost.

Focal has completely redesigned its flagship open-back headphone, Utopia. This a luxury audio device with a vertigo-inspiring price tag of $5,000. Let that settle in for a moment, but don’t make the mistake of dismissing these cans as an overpriced novelty designed to bleed cash from swells with deep pockets.

Utopia is the finest headphone I’ve ever heard, delivering audio quality and detail that compares favorably to the output of floorstanding loudspeakers that cost tens of thousands of dollars.

This review is part of TechHive’s coverage of the best headphones.

The Focal Utopia comes in an upholstered black “leather-effect” (Focal’s term) box. Slide the top half from the bottom (and I do mean slide; the inside of the box has a black felt lining) and you’ll encounter the black fabric case that holds your headphone and another upholstered box that holds the balanced headphone cable and a black folio that holds the instruction manual and a flyer for the Naim Uniti Atom Headphone Edition amplifier and streamer (a component TechHive enthusiastically reviewed in September 2021).

The entire presentation has the kind of flash you’d expect if you were buying a Ferrari or Lamborghini. That’s not a bad analogy for what’s going on here. Utopia is the maximum-price, maximum-performance audio equivalent of those exotic sports cars. Should you buy one, Focal’s presentation will make you feel like you’ve made the right choice even before you start listening.

The big change here is the voice coil. The 100-percent aluminum version in the original Utopia proved to be a bit fragile, so the redesigned coil is fabricated from 30 percent copper and 70 percent aluminum to improve reliability while maintaining the same high level of acoustic performance.

There are changes to the driver grill, as well. The Utopia now has the M-shape grill that Focal introduced with its open-back Clear Mg headphone. The M follows the shape of the dome and Beryllium driver inside, reducing the gap between the driver and the grill. This change is designed to improve the linearity of the frequency response, mostly in the treble range.

The new design incorporates the distinctive honeycomb pattern you’ll find on many other Focal headphones. The manufacturer says this design delivers a more open sound with greater driver movement. The yokes are forged recycled carbon fiber, yielding a lighter and more comfortable headphone.

Focal provides two cables: one 5-foot (1.5m) mini-jack cable with a 1/4-inch (6.35mm) jack adapter, and one 10ft (3m) cable with an XLR connector for headphone amps with balanced outputs.

The Utopia headband is genuine leather and so are the ventilated memory-foam earcups. They’re comfortable for long listening sessions and the perforations in the earcups echo the design of high-end driving gloves.

Listening sessions with the Focal Utopia

As my primary devices for listening tests, I used the Focal Utopia headphone with the Naim Uniti Atom Headphone Edition amplifier and the new Astell&Kern A&ultima SP3000 digital audio player I evaluated recently.

I also used my personal pair of Focal Celestee closed-back headphones ($999) for comparison, and I listened to both headphones with a Questyle M15 portable DAC connected to an iPhone 13 Pro Max.

I listened to a 24-bit/96kHz high-res Qobuz stream of the 2019 Giles Martin remix of The Beatles’ Abbey Road and the results were breathtaking. “Something” was a particular revelation. I grew up listening to the song on a late 1970s Capitol vinyl pressing, and George Harrison’s guitar parts and George Martin’s exceptional string arrangements blurred together into a solid chunk of midrange audio. Listening through the Utopia, each individual instrument can be identified, and Ringo Starr’s exceptional drum part sits in exactly the right place in the mix.

To be clear, this track still comes off as a cohesive mix. It’s just that there are so many layers to be revealed with closer listening. Headphones this good open hours of discovery on tracks you thought you already knew incredibly well.

My daily driver headphone is the Focal Celestee. They’re also fantastic cans that offer incredible value and have delivered many hours of great listening. No matter how great “Something” sounds through the Celestee (and it sounds fantastic), there’s an extra level of detail with the Utopia that the Celestee just can’t match. Take the descending keyboard line that happens about 1:25 into “Something.” There’s a delicacy to that part that the Utopia nails, but the Celestee can’t quite capture.

Switch over to the Questyle M15 DAC plugged into an iPhone and the gap between the two models is far less pronounced. The $250 M15 is a great portable DAC, but it’s not able to operate on the level of the superior Naim headphone amp or the Astell&Kern digital audio player. If you’re going to invest in the Focal Utopia, be prepared to also drop some cash on a high-quality headphone amp and DAC that will allow you to experience their full potential.

Another revelation was the 24-bit/192kHz Qobuz stream of Innervisions, the 1973 album Stevie Wonder recorded with electronics wizards Robert Margouleff and Malcolm Cecil. Once again, hearing the instrumentation of a track like “Higher Ground” with such discrete separation between instruments gives the illusion that you’re in the control room listening to a mix session in real time. It’s both an added level of listening enjoyment and an incredibly enlightening experience for anyone who’s curious about just how a record is put together.

Of course, great studio work isn’t limited to the 60s generation. Taylor Swift’s 2020 album evermore is an exceptional recording, and a 24-bit/88.2kHz Qobuz stream of the song “champagne problems” shines played through the Utopia. The song opens as a vocal and piano duet and harmony vocals, bass, and guitar are introduced slowly over the course of the song. It’s a spare track overall, but the thrill comes with the backing vocals. Individual voices in the background array can be distinctly identified; it’s not just the undifferentiated mass choir you’d hear at a lower resolution when streaming from a service like Spotify.

I could write several thousand words about other discoveries I’ve made over a few weeks with the Utopia, but here’s a short list of high-res albums I’ve heard in entirely new ways with this headphone: Scott Walker’s Scott 4, Massive Attack’s Blue Lines, The Clash’s London Calling, Stan Getz’s Getz/Gilberto, Arctic Monkeys’ Tranquility Base Hotel & Casino, Led Zeppelin IV, Björk’s Utopia, Talk Talk’s The Colour of Spring, and Booker T. & the M.G.’s McLemore Avenue. I know all these albums well, and the Utopia has revealed details on each one that I’ve never heard before.

Nothing’s perfect, not even the Focal Utopia

You want a flaw? OK, I found one. Maybe it’s more like a nitpick, but it’s one tiny thing that’s less than ideal on the Utopia headphone. While the left and right earcups have easy-to-read L and R markings at the base of the headband, the L and R for the headphone cables are embossed into the blue cable covers with no white highlighting in the depression.

That means it’s hard to see which cable plugs into left and which into right unless you’re in direct light. The other minor quibble is that the red dots on the headphone that need to be lined up with the ones on the cable when connecting are also kind of hard to see.

I might not have noticed if not for direct comparison with the Celestee. The L & R are printed on the metal sleeves next to the plugs on that model and are incredibly easy to see. The embossed L and R on the headphone itself are also much larger and right next to the jack on each earpiece.

Is this really a flaw or just an issue related to my failing eyesight? Probably the latter, but let’s get real: The market for the Utopia is dominated by buyers in a demographic that’s worked long enough to see their eyes start to fade. Get yourself a penlight to go with your new headphone.

Is the Focal Utopia really worth 5 large?

The Focal Utopia is designed for careful, concentrated listening. I’ve never heard anything outside of a recording or mastering studio that can reveal the details of a great recording like this headphone can.

The flip side, of course, is that cans this good can also highlight the flaws in recordings that have been brick-walled in mastering, or when there’s a surfeit of autotune on the vocals, or excessive editing has been used to patch together a usable take. There are plenty of records made with those techniques that sound great through a pair of good budget headphones—because that’s how they were designed to be enjoyed.

Utopia is a headphone for listeners whose tastes run to recordings from the golden age of stereo, meticulously recorded jazz and classical albums, and pop and rock music that captures the sound of bands playing together in a room.

The Focal Utopia is for people who enjoy records as much as or more than they enjoy music. With the right audio source, they offer a window into the creative process behind the recordings more than any other home-audio product I’ve ever heard. They are truly magical.