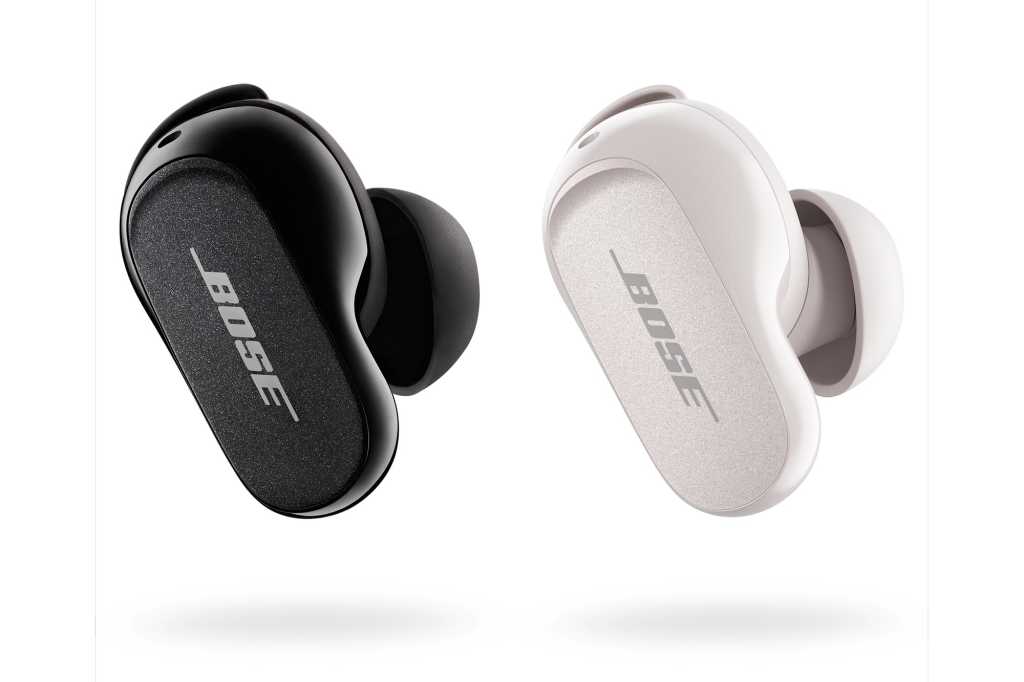 There’s so much innovation in the Bose QuietComfort Earbuds II that these breakthrough buds deserve a new name—and demand serious consideration by anyone in the market for a new high-end mobile audio experience.

But instant name recognition is hard to come by, so Bose is to be forgiven for merely attaching a roman numeral to its best noise-cancelling in-ear headphones. After a week of serious workout in my ears, the QC Earbuds II have become my go-to, top-of-the-pile faves.

This review is part of TechHive’s coverage of the best noise-cancelling headphones.

Bose is celebrating a first-of-its-kind sound personalization technology here—the company calls it CustomTune—that calibrates both these earbuds’ audio performance and their noise-cancellation prowess to each user’s ears. Powered by a customized version of Qualcomm’s QCC5171 Bluetooth chipset and Bose’s decades of proprietary DSP algorithm development, CustomTune works its magic without so much as a “Yes, please” from the user.

The processing happens automatically whenever you remove the buds from their case and put them in your ears. In less than half a second, a self-triggered musical woosh test tone measures how your ear canals “warp” that tone. The circuitry compensates for any distortion, custom tunes the buds’ equalization, and likewise enhances noise cancellation to provide both the ideal frequency curve and what Bose is calling “the best noise reduction” ever found in any earbuds or over-the-ear headphones. As I’ll get into in a bit, my listening tests indicate that’s not just hyperbole.

The QuietComfort Earbuds II have been physically redesigned as well. They look much cooler and the comfort level is way up. You won’t be hearing many suggestions of “if you have the earlier model, there isn’t much need to upgrade.”

Forget the geeky, boxy, rectangular look of the original. While that enabled a bigger sound field than the competition could deliver, it also broadcast a brash, “pay attention to me” physical persona that was, how can I say this nicely, distinctive. Bose’s redesign also eliminates the oversized stabilizer wings that were fused to its predecessor’s ear tips. Those annoying appendages had to be carefully shoved into each of your ears’ concha to keep the buds from falling out.

These still are not the most petite buds, but the QC Earbud IIs are certainly more discrete in appearance and more comfortable for long-term use. They’re about one-third smaller and 20 percent lighter, with a back that’s been re-shaped to cling tighter to the ears. And there’s now a two-piece (instead of integrated) ear tip Fit Kit that lets you individually switch between three sizes of silicone ear tips and three sizes of tiny, barely-there stability bands. The latter also hug the concha quite well, without making a painful pest of themselves.

How do the Bose QuietComfort Earbuds II sound?

If I had my druthers, I’d rename these things the Bose Bliss Buds, because they perform with such relaxed grace and assurance. They sound natural, well balanced, and detailed with whatever kind of music you throw at them, from bass-rich dance pop and hip hop (Ariana Grande, Da Brat), to stomping rock (Foo Fighters, AC/DC), to big-band countrypolitan (Lyle Lovett’s new beaut 12th of June)—all manner of jazz and high-toned classical, too. They lift the fog and add space around each voice and instrument.

I’m hearing production flourishes previously buried in mixes, subtleties that add to the sense of three-dimensional presence, atmosphere, musical intrigue, and romance. Take the extra soupçon of Hammond B3 vibrato emotionally enriching the late Joey DeFrancesco’s collaborative album session with Van Morrison, The Prophet Speaks. Or the subtle, airy interplay of muted trumpeter Enrico Rava and keyboardist Fred Hersch on the oh-so-tasteful The Song Is You. Classics are worth revisiting for previously hidden touches that now pop out of the shadows, such as the semi-buried, second level of background jingle-jangles I’m now hearing from ace percussionist Victor Feldman on Steely Dan’s “Do It Again.”

Stephen Colbert recently acted surprised when guest James Taylor shared how he was all over the production on Joni Mitchell’s classic album Blue. Mr. Late Show should have listened on these buds, because J.T.’s sweet guitar chording jumps out in plaintive and trademarked relief. And for follow-ups, Steve, move on to my favorite young L.A. folk rocker of the hour—Madison Cunningham—so clear in lyrical intent and playful with mod electronica effects on her new album Revealer as these buds, um, reveal.

Noise-cancelling earphone technology has long taken knocks for dulling the sound performance or introducing unwanted hiss—once considered necessary byproducts when eliminating those droning jet engine or rumbling train sounds that wearers wanted to escape. It’s the reason purists have long demanded a switch on their earphones to turn noise-cancelling circuitry off.

But get this: The Bose QC Earbuds II don’t need no stinking defeat switch. Out of the box, noise cancelling is always on—even when you switch modes from Quiet (full noise cancellation) to the alternative Aware Mode with ActiveSense, which selectively lets in some outside sounds when you don’t want to lose touch with your surroundings. If you insist, it is possible to damp down the noise cancellation to a lower level or seemingly to a full “off” position by fine tuning and storing one or two optional “create mode” settings, available in the Bose Music app.

Still, I defy you to detect any dereliction in the QC Earbud II’s musical delivery with noise cancelling cooking. Bose’s CustomTune circuitry calibrates the noise-reduction signal to your ears and the needs of the moment with surgical precision, targeting frequencies that were previously difficult to reduce without taking a blunt axe to everything in the forest.

I heard this for myself during a recent visit to my neighborhood swimming pool. After putting in the Bose buds, I could kiss goodbye—simultaneously—the loud boombox soundtrack (“Eye of the Tiger”) pumping up an aqua aerobics class, the screaming tykes and gurgling water fountain aerating the baby pool, and some nearby gabsters talking about—gee, I have no idea. If Bose ever does rename these earbuds, it should also consider retagging Quiet mode as Oblivion, thanks to the way it takes you out of your zone and deep into the music.

Making or taking phone calls when wearing these things is likewise a pleasure—the talker at the other end intones with a brighter presence than I’m used to hearing on my high-grade Ooma internet phone rig at home. And from the other end, I’ve been complimented on how clear and crisp I sound.

But take note: While Bose’s noise cancellation does eliminate almost all environmental sound distractions in the wearer’s ears during phone calls, the listener at the other end is not quite as fortunate. Bose says the microphone (one of four in each bud) dedicated to calls and Apple/Android voice assistance offers “improved voice pickup enabled by an updated noise removal algorithm,” but it’s not quite the same.

Yes, these buds are better than others at blocking out wind interference when you’re outside, but when wearing the buds and answering a call in my kitchen, I was begged to “please turn down the TV,” which I’d previously set to blast level for testing purposes. Comically, this loud “breaking news” chatter wasn’t bothering me at all on my oblivious, noise-cancelled end. I’d even forgotten the telly was on.

Are Bose QuietComfort Earbuds II easy to set up and operate?

These earbuds couldn’t be simpler to get going. Just point your smartphone’s camera at the QR code on the package to download the Bose Music app. Once open, it will search and find your earbuds and probably instigate a firmware update. Be patient; mine took almost 30 minutes to complete.

The earbuds will then automatically start searching for Bluetooth connectivity to your streaming source—or you can change that up by tapping the Bluetooth refresh button on the back of the charging case. The Bluetooth 5.3 radio in these buds is quite robust. I could travel two house floors away from the music beaming from my iPhone 12 Pro and still hold onto a stable signal.

The buds arrive with the medium size (of three) silicone ear tips and the smallest of three sizes of silicone stability bands pre-installed. I ran the “Fit Test” in the Bose app, which instigated a CustomTune violin swoop sound, then instantly declared I had a good seal. Later, I decided the buds were a mite tight, so I switched to the smallest-size ear tips and again received a good fit endorsement.

With this combination, I can comfortably listen to music (and talk on the phone) for all 6-plus hours these things will play on one charge. If taking a break, returning the Bose buds to their dental-floss-sized case quickly tops off their batteries. The case can re-charge fully depleted buds in one hour, while a mere 20-minute charge provides up to two hours of playback. The case itself fully recharges (for 18 hours of backup power) in three hours via USB-C. A short (12-inch) USB-A-to-USB-C cable is included, but an AC adapter is not.

Function-duplicating capacitive touch controls on both left and right earbuds offer a fast-tap option to pause and play (which is easy to trigger accidentally) or answer a call, while a well-finessed up/down finger slide raises/lowers the volume. Two taps on either bud will skip a track, three taps replay the previous track, and a long hold on either side either activates your phone’s voice assistant or shifts through the two preset noise-cancelling modes and two custom noise-cancelling modes if you decide to add them.

Customizable adjustment of bass, midrange, and treble settings is enabled in the Bose Music app. But honestly, I found the CustomTune EQ was so spot-on and satisfying, so close to “as the artist wanted me to hear the music,” that I’ve mostly left the EQ flat. Even listening to rock and rap, I’ve never felt the need to crank up the bass more than a couple notches, although all three EQ settings can be adjusted plus or minus a full eight steps.

Updates to the Bose Music app and linked QC II earbuds “will be released over time to add new features and benefits,” says the maker. I could readily imagine them adding spatial audio support to reach feature parity with headphones and earbuds from the likes of Sony and Apple. An automatic “pause audio playback when the wearer speaks” option, as found on Sony’s clever new LinkBud-S buds, would be welcome, too.

When all is said and done, however, the Bose QuietComfort Earbuds II don’t need much in the tweaking department. If you just can’t stand black buds, a Soapstone (off-white) color variant will be available later this year at the same $299 price as the glossy Triple Black version you can pick up now. But think of all the musical enjoyment you’ll miss while waiting.