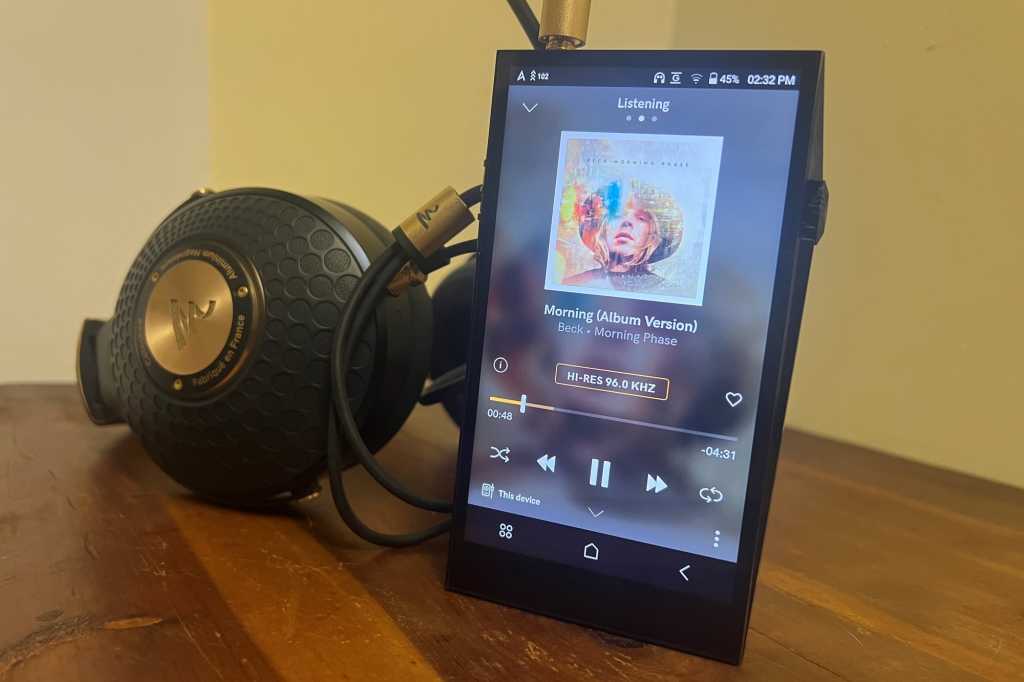 With the A&ultra SP3000, Astell&Kern has delivered a state-of-the-art DAC in a handheld music player that’s a joy to use.

Astell&Kern makes some of the finest digital audio players on the market, so the release of a new flagship model should be an event. The new A&ultima SP3000 DAP provides a fantastic listening experience and complements that with a sleek new operating system in a beautifully designed solid body.

This premium player will retail for the premium price of $3,699, but the level of performance it delivers might justify that number. The SP3000 will be available the first week of October 2022.

This review is part of TechHive’s in-depth coverage of the best digital audio players.

Perhaps unsurprisingly, the SP3000’s most important feature is its audio-processing circuitry. Not only is A&K the first manufacturer to use AKM’s (Asahi Kasei Microdevices’) all-new flagship DAC, the AK4499EX, the SP3000 has four of them, plus two of AKM’s equally new AK4191 delta-sigma modulators, which process the digital signal prior to the digital-to-analog conversion (other digital audio players process the digital signal within the DAC itself).

But why four DACs, you ask? One for the left channel and a second for the right channel to feed a left/right pair of amplifiers with balanced outputs, and third and fourth DACs to feed a discrete pair of amps with unbalanced outputs. So, you can listen to the SP3000 using either balanced headphones (with either 2.5- or 4mm jacks) or the more common type of unbalanced headphones with 3.5mm jacks (you can find high-performing headphones in both classes).

A&K says the combination of these components endows the A&Ultima SP3000 with complete separation of digital and analog signal processing and contributes to the SP3000 achieving an astounding signal-to-noise ratio of 130dB.

An impressive array of listening options

The earliest digital audio players were higher-performance versions of MP3 players or Apple’s iPods. They offered more storage and could decode better-quality audio files. We’ve seen an exponential increase in both audio quality and versatility over the last two decades, and the A&K SP3000 is at the pinnacle of the concept today.

You’ll get native playback of high-res PCM audio files (up to 32-bit resolution at sampling rates as high as 768kHz) and support for up to DSD512 files (Direct Stream Digital files that have a sampling rate 512 times higher than a CD). Is it possible someone will develop even higher-resolution playback in the future? Sure, but it’s hard to imagine anyone being able to discern higher-resolution music than what’s on offer with this device.

This player is outfitted with 256GB of internal memory, plus support for microSD cards with up to 1TB of capacity, so you can load a massive library of even the largest Hi-Res music files and take them with you. You can use a USB cable for file transfers, but the SP3000 also supports Wi-Fi 5 (dual-band 2.4/5GHz).

If you have a DLNA server on your home network, the SP3000 can connect and stream files directly from the server, or you can connect it to your Mac or Windows PC with a USB cable and use it as an outboard DAC. Roon certification is still in process.

The SP3000 is compatible with a wide array of music services, with apps for Qobuz, Tidal, Apple Music, Spotify, Amazon Music, and Deezer. It also supports some of the lesser-known international services, such as Flo, Moov, KKBOX, AWA, Yandex, Bugs!, and Melon.

If you want to use wireless headphones, the SP3000 has a Bluetooth 5.0 radio onboard, and it supports both the aptX HD and LDAC codecs for 24-bit audio playback. You can also use A&K’s BT Sink to wirelessly stream music from a library of music stored on an external device, such as a computer or smartphone.

That’s a dizzying array of options, but the heart of any digital audio player is its ability to play files stored on the device or streamed from a music service for a listener using headphones. And that was the primary focus of my evaluation.

Astell&Kern gave this DAP a decidedly premium feel. The case is made from 904L stainless steel, the same type that Rolex uses to give its watch cases their luster and durability. The case has a decidedly hefty feel and is available in either silver or black.

To protect the unit and continue the luxury theme, each SP3000 will ship with a goatskin leather case manufactured by the Alran tannery in the south of France. While the cases weren’t ready in time to be shipped with our eval unit, A&K says the black leather cases were created with Alran’s unique Hand-Boarding technology, which processes the leather by rubbing it in various directions using wooden planks, allowing users to feel the texture of the surface.

Astell&Kern has redesigned the Android-based software that powers the listening experience. In my Astell&Kern SP-2000T DAP review earlier this year, my only complaint about that otherwise excellent player was its slow-to-respond, difficult-to-navigate software.

I didn’t encounter any of that with the software powering the SP3000, which is outfitted with a beautiful 5.46-inch full-HD (1920 x 1080 pixels) touch screen. The software response is both smooth and quick, and minor tweaks to the navigation make this player a joy to use. Accessing the apps for external streaming services like Qobuz, Tidal, and Apple Music is far easier, and the apps themselves are much easier to use because most of the lag has disappeared. It’s not quite as seamless as using those services on an iPhone 13 Pro Max, but it’s close enough to be a thoroughly satisfying experience.

What it’s like to listen to music on the Astell&Kern SP3000?

I rotated four pairs of headphones with the SP3000—the closed-back Focal Celestee, Sennheiser’s IE-900 in-ear monitors (review forthcoming), a pair of Sony MDR-7506, and a yet-to-be-announced flagship model from a well-known brand. I used the same headphones with a Questyle M15 mobile DAC/headphone amp plugged into an iPhone for comparison.

Astell&Kern has a well-rounded library of Hi-Res music loaded onto its review units, featuring a variety of jazz, classical, rock, and R&B. I spent a lot of time with Pink Floyd’s Wish You Were Here, the classic jazz album Getz/Gilberto, and Michael Jackson’s Thriller, but landed on a 24 bit/96kHz FLAC version of Fleetwood Mac’s 1977 album Rumours as my focus, with special attention to “Go Your Own Way.”

For me, “Go Your Own Way” is as close to perfect a recording as any ever made, something that’s even more impressive if you’ve seen the Classic Albums Series documentary and know the stories about how chaotic the album sessions were.

Everything I know about stacking acoustic guitars to create drama in a mix, I learned from listening to “Go Your Own Way.” I’ve studied this track and I’ve never heard as much detail as what the SP3000 revealed. Using any of the best-quality earphones, it’s possible to hear the individual acoustic guitars as they strum in the choruses instead of as a wall of sound. It’s breathtaking.

For me, the record’s only flaw comes at 2:12 into the song. The first snare hit into the chorus coming at out of the solo doesn’t crack the way it should. Listening through the SP3000, that moment is especially easy to hear. Maybe it’s a consequence of the issues the band and producers had with salvaging the drum tracks (watch the documentary for details), but that Mick Fleetwood drum hit is uncharacteristically mushy.

Switching to the Qobuz app loaded onto the SP3000, I opened a 24-bit/96kHz version of “Shallow,” from Ryan Adams’ 2003 album Rock N Roll. That’s a session I produced. The track features a sleigh-bells percussion track that sits behind a storm of guitars when you listen on CD, but that percussion track becomes a discrete part of the mix when streaming on the SP3000.

The song hasn’t sounded that good to me since I heard it during a mastering session with Ted Jensen at Sterling Sound. There was so much detail revealed over the course of the entire album that I now remember a host of specific incidents and previously forgotten conversations from sessions that took place two decades ago.

There are a lot of audiophile products that promise to let you hear music just like it sounded in the recording studio. That’s usually marketing hyperbole, and this is the first time I’ve ever experienced something like this with an album I’ve worked on. It’s both magical and a bit unnerving.

There’s a caveat with a player this good. The SP3000 creates an immersive experience when playing back great performances that are recorded. If your tastes run to 1970s and 80s underground rock, the often low-fi and amateurish recordings of some otherwise great music (looking at you, SST Records) don’t exactly hold up under the SP3000 microscope.

The same is true for a lot of late 90s/early 2000s recordings, an era when engineers were enamored of the added ability to create heavily edited complete performances from scraps of vocal or instrumental takes. The artificiality of those Frankenstein-style constructions tends to be exposed by the SP3000’s excellent processing.

All that said, the SP3000 shouldn’t be penalized because it doesn’t make every single piece of music sound better. Some music might be better enjoyed on vinyl or even via a lower-resolution digital stream, but there’s a wealth of amazing music and outstanding recordings that can be elevated by a music player this good.

Should you buy the Astell&Kern A&Ultima SP3000?

The SP3000 is by far the best experience I’ve had listening to Hi-Res music. The upgrades to the internal electronics have made it both easier to use and elevated the quality of the music playback.

If you’re going to make the investment, the SP3000 is best paired with premium headphones. All the headphones I used for testing sounded great when plugged into both a $250 Questyle M15 DAC and the SP3000, but the $100 Sony MDR-7506 didn’t demonstrate as much improvement when switching to the SP3000. This expensive DAC needs top-self headphones to perform at its best.

Even though the SP3000 can be used as a versatile playback unit, at heart it’s a personal listening device. If you can afford to make the investment and pair the SP3000 with some great headphones, this digital audio player will provide a stellar listening experience.