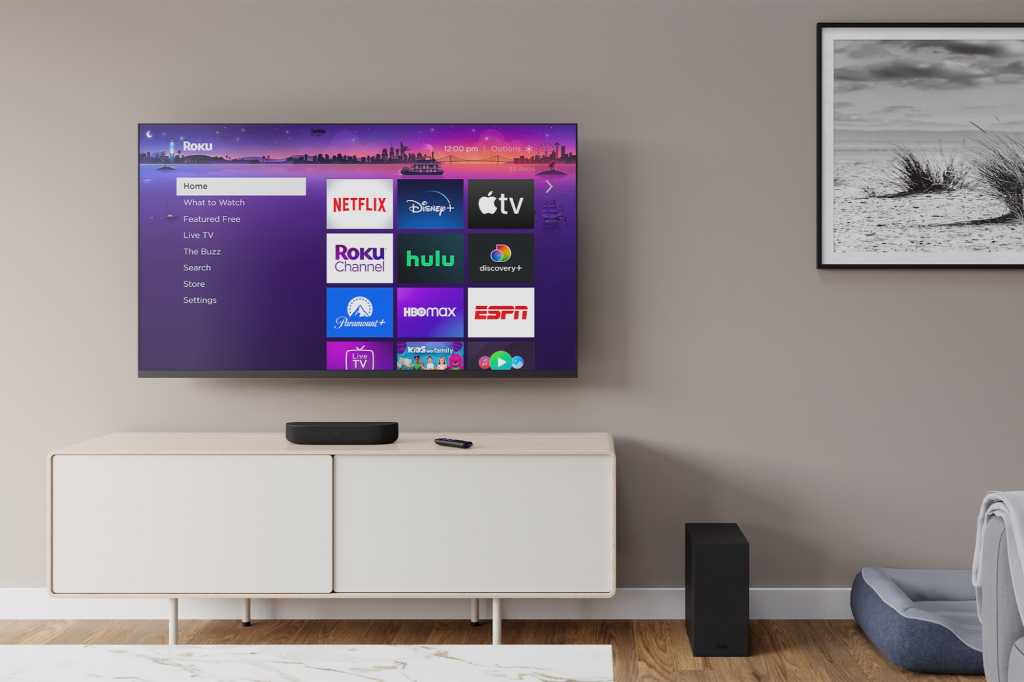 Picking up shows where you left off is about to get easier for Roku users, with Roku OS 11.5 bringing an improved “continue watching” feature, while the “save list” will soon migrate from mobile devices to TV screens.

Slated to begin rolling out in the “coming months,” Roku OK 11.5 will also add a bevy of other features, including direct Bluetooth headphone support for its soundbars and high-end Roku Ultra streaming box, a new way to browse upcoming shows across a variety of streaming services, and categories in Roku’s live TV streaming guide.

Finally, the streamer is teeing up a new wireless subwoofer and a refreshed version of the HD-capable Roku Express player.

Roku users have long been able to resume shows they started from The Roku Channel, but with the arrival of OS 11.5, that functionality is expanding to include other streaming services.

When you navigate to the “What to Watch” section of the Roku home screen, the Continue Watching row will soon include videos you began watching on HBO Max, Netflix, and Paramount+, in addition to The Roku Channel. Just click one of the titles to pick up where you left off.

While the Continue Watching row will be limited to those four streaming services for the time being, Roku says that there are “more channels to come.”

Also coming soon to the Roku home screen’s What to Watch section is a “Save List,” which until now has been relegated to the Roku mobile app and The Roku Channel.

Instead of having to dig up your phone to save a show for later, the new Save List in Roku OS 11.5 will let you add shows to your list from the video detail page in the main Roku interface.

You’ll be able to access your Save List in What to Watch, directly under the new Continue Watching row, and the feature will work with every channel available on Roku.

Besides the U.S., Roku’s revamped Save List will also be rolling out to Canada, the U.K., and Ireland.

The ability to listen to Roku streams privately on headphones has been one of the streamer’s most popular features, but until now, it’s required connecting your headset to either a mobile device running the Roku app or to one of Roku’s higher-end remotes.

Starting with Roku OS 11.5, you’ll be able to pair Bluetooth headphones directly to Roku’s Bluetooth-enabled streaming players, including the second-gen Roku Ultra and the Streambar and Streambar Pro soundbars.

You’ll be able to connect and disconnect paired Bluetooth headphones from the Options menu, while an “auto connect” setting will automatically reconnect a paired headphone when it’s powered on and in range.

Multiple Bluetooth headphones can be paired to a single Roku device, but only one user at a time can be listening via Bluetooth Private Listening, a Roku rep said.

One of OS 11.5’s new “content discovery” features offers a way for Roku’s channel partners to show off their latest wares.

Dubbed “The Buzz”, the new feed will be accessible from the Roku home screen, and it will let users browse a “frequently updated” series of posts, including video clips, images, trailers, interviews, and other “short-form content” promoting new movies and TV shows.

Among the channel brands that will be promoting their latest offerings on The Buzz are AMC+, Apple TV+, BET+, Crackle, Hallmark Movies Now, IGN, Plex, Popcornflix, Showtime, Starz, The CW, Tubi, Vevo, and Wondrium, with “more to come.”

Roku is announcing new hardware alongside OS 11.5, starting with a new wireless subwoofer.

Slated to go sale November 7 for $129.99, the Roku Wireless Bass is a “slim” and “compact” alternative to the existing $179.99 Roku Wireless subwoofer. Roku says the Wireless Bass can deliver “rumbling lows” and “deep, dynamic bass,” although the company didn’t release details about the subwoofer’s drivers or physical specs.

Roku is positioning the Wireless Bass as “the perfect companion” to the Roku Streambar, and the company is planning a $249.99 bundle that includes the two products.

Also on tap is a refresh of the HD-only Roku Express streaming player, which will get a pair of improvements: dual-band Wi-Fi to improve streaming performance, as well as more storage to boost channel loading times.

The revamped Roku Express is set to ship in mid-October for $29.99, the same list price as the current model.

Roku says it will add categories to its Live TV Programming Guide as part of OS 11.5, making it easier to sift through live streaming and over-the-air channels.

Among the categories will be your typical genre options, such as News, Spots, Movies, and Entertainment. Other categories will include Recents, Favorites, and Subscribed.

Meanwhile, Roku OS 11.5 will let you navigate Roku Voice search results with additional voice commands; for example, you could say “the second one” to select from a list of possible search results.

Roku will also be adding a new “Roku Store” to the home screen menu, with the store offering a “more visual” and “immersive” place to browse free and paid channels.

Finally, the Roku mobile app will get a Live TV Channel “Guide” button for one-tap access to live streaming channels.