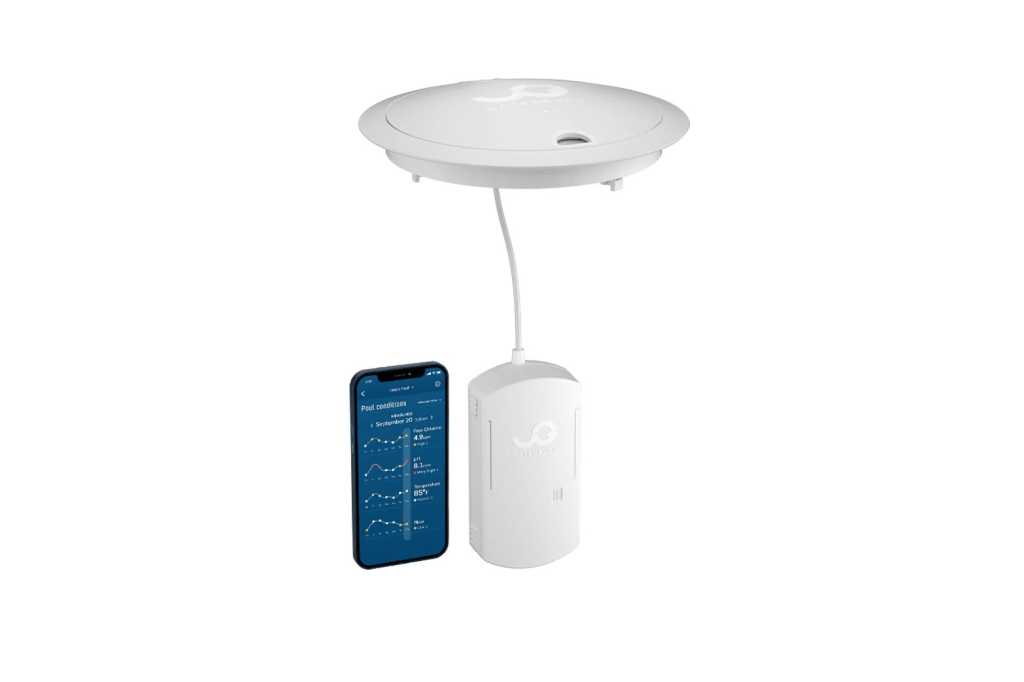 Image: WaterGuru
At a glance

The WaterGuru Sense offers a convenient way to test basic pool chemistry, but its associated costs can add up.

If there’s any part of a homeowner’s property to really geek out about, it’s the swimming pool. Improper pool maintenance can dramatically shorten its life, and even be hazardous to swimmers if it becomes a breeding ground for bacteria, algae, mosquitoes, and more. I didn’t really think about any of this when we bought a house with a pool, but now I pay a guy 50 bucks a week to scoop out a few leaves and make sure we don’t get Legionnaires’ disease.

Checking pool conditions yourself isn’t difficult, but it does involve lab strips and/or vials of test chemicals added to a sample of pool water, then comparing the resulting color to a reference chart. It’s not an exact science and, more to the point, it’s a hassle, especially when you’d rather be in the pool, not hunched over it with a test tube.

The idea behind WaterGuru Sense is simple—and fairly genius. Drop the device into your pool—it dangles inside your skimmer, where you’ll never see it—and get daily updates of the levels of pH and free chlorine sent to your smartphone. Free chlorine, if you’re not aware, is chlorine that hasn’t already bonded to contaminants in the pool water. And you need to monitor your pool water’s pH level because it impacts chlorine’s decontamination effectiveness. High pH levels diminish chlorine’s effectiveness, while low pH levels can cause skin and eye irritation.

The WaterGuru Sense hardware looks more complex than it is, in part because it’s composed of two pieces. The top part contains four C batteries (included) and replaces you pool’s skimmer cover. (If you have a square cover instead of a more typical round one, WaterGuru will provide one on request.) The brains of the unit hang from a cord into the water below, constantly submerged.

The heart of the Sense is in this lower piece, which includes a replaceable, sealed cassette—imagine a small VHS tape—that presumably contains all the testing components needed to make sense of your pool chemistry on a rolling basis. Following a registration with the WaterGuru app—Bluetooth is required, then a connection to your 2.4GHz Wi-Fi network—a 36-hour calibration period is specified before you’ll start to see results being reported in the app.

In my testing, the calibration took several days longer than that to complete: I installed the unit on a Wednesday and didn’t get results until Saturday. This is in part because the Sense only works while the pool pump is operating, and water is in motion. My pump only runs about half the day, though WaterGuru detects water flow (along with water temperature) as part of its kit. Various connectivity errors—and one instruction to remove the mesh filter bag that surrounds the cassette—persisted during those first few days, eventually resolving after a handful of resets and other minor tweaks.

Once the WaterGuru is up and running, it delivers solid information: Regular, ongoing reports of free chlorine and pH levels—along with “good/moderate/bad” bands—are helpful and comforting, and WaterGuru lets you track all this over time, so you can troubleshoot if conditions begin to slip. (You can also ask for a measurement on demand, but only if the pool’s pump is running.) The only real question is how accurate these measurements are. As part of its kit, WaterGuru includes two mail-in vials—also available as part of its WaterGuru Test offering—which test for the standard two conditions and much more, including the levels of calcium, phosphates, and copper. The catch: I registered and mailed my test kit in on day one; 9 days later, I’m still waiting for the results.

I also tested WaterGuru’s results against my pool maintenance company’s standard test kit, and the numbers were right in line with it; although, for what it’s worth, my pool tech said that WaterGuru’s suggested free chlorine minimum of 1.6 was much too low to keep algae at bay.

The other hassle here is that the cassettes don’t last forever. Each one is good for just 8 weeks, after which it must be replaced ($19.95 each or $50 for a 3-pack). That’s $108 for a year’s worth of WaterGuru consumables (vs. $20 or less for a year’s worth of test strips). WaterGuru would also, of course, like to sell you any chemicals you need to correct any poor conditions that might be developing.

As hassle-relievers go, WaterGuru Sense is compelling; that said, pools are expensive as it is, and while WaterGuru takes the testing element out of the equation, it doesn’t do anything about brushing away the algae and scooping up the leaves and bugs. But perhaps that’s asking for too much.