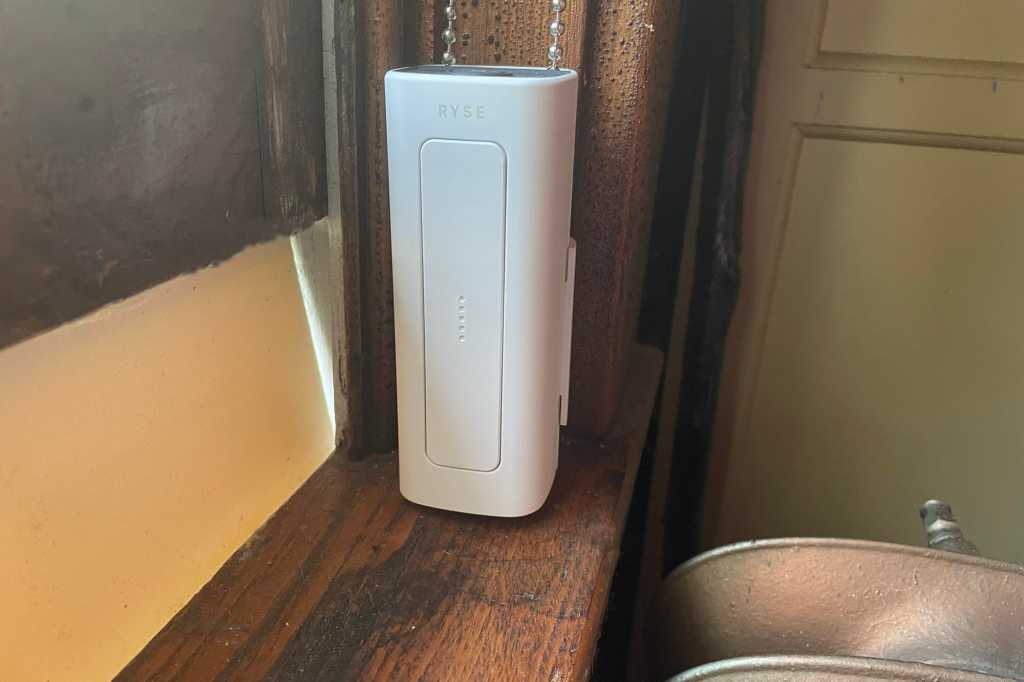 Image: Ed Oswald/Foundry
At a glance

The Ryse SmartShade is a great option for homeowners who want to convert the custom-made shades they already own into modern smart shades. If you can be satisfied with budget-priced, off-the-shelf smart shades, on the other hand, that might be a more economical solution.

Smart shades have been around for years. But this kind of window-covering upgrade typically entails replacing what you already have, even if what you have is otherwise perfectly serviceable. The Ryse SmartShade is a retrofit solution that converts any conventional beaded-chain shade into a powered smart shade. That can save you a lot of money compared to buying something entirely new, especially if you have custom-fitted shades. The options needed to make the Ryse solution truly wireless and truly smart, however, do cost extra.

By default, each $169 Ryse SmartShade runs on AC power, which means it will have a power cord dangling from its base and you’ll need to have an AC outlet on the wall nearby. You can eliminate the cord with an optional battery pack, but that will set you back $69 for each shade you convert.

This review is part of TechHive’s in-depth coverage of the best smart window shades and blinds.

The Ryse SmartShade is not very smart right out of the box, it’s just motorized with a Bluetooth radio so you can control it with your smartphone. If you want to control the shade with voice commands (Alexa, Google Assistant, or Siri via HomeKit); create routines or schedules for automated operations; control the shade remotely, over a broadband connection; or group multiple shades together (10 max) for simultaneous operation, you’ll need the Ryse Smart Bridge, which is another $69 option.

You’ll need only one Ryse Smart Bridge—and you will want one—but you’ll need to hardwire it to your router (or to a Wi-Fi range extender) with an ethernet cable. That’s not a big deal with a router that has a 4-port switch, but you might need to buy an outboard ethernet switch if all of your router’s ports are occupied (and an increasing number of routers have just a 2-port switch).

Ryse sent two Ryse SmartShades for this review, along with its SmartBridge. I tested the system with some new chain-operated shades that replaced ones that had seen better days. Unless you have very thick and heavy shades, the Ryse product should be able to handle them. The company says shades can be up to 108 inches long (9 feet tall) and weigh up to 10 pounds.

How do you install Ryse SmartShades?

Since I needed to hang new shades in addition to the Ryse SmartShades and SmartBridge, my installation took longer than usual. Even so, I got all the mechanical work done in less than an hour. Setting up the Ryse gear took another 10 minutes.

Unless you have a massive shade, the Ryse SmartShade can handle it. The company says the device handles shades up to 108 inches wide and long (9 feet), which is much bigger than the windows in the average home. The weight of the shade is something to consider, too: the SmartShade’s maximum lift capacity is 10 pounds.

The Ryse app provides step-by-step instructions on installing the SmartShade on your shade’s chain (both metal and plastic beaded chains are supported). We suggest you take great care in this step and ensure the chain is taut. There was a lot of slack in my chain at first, and the chain almost immediately jammed and broke. But I attribute that to user error, not a flaw in the SmartShade’s design. Once I’d corrected my mistake, the second operation went off without a hitch.

The app will guide you through setting the shade’s top and bottom positions. If I’d followed these clear instructions more closely, I probably wouldn’t have lost a chain in the process.

Is the Ryse app well designed?

Don’t be alarmed by the poor user-review rating—2.1 stars out of 5—you’ll see for the Ryse app at the Apple App Store (the Android version hasn’t garnered any reviews at the Google Play Store yet). Those reviews of the iOS version appear to be mostly from 2020 and 2021, when Ryse was operating as Axis. The product today is much better than it was, and so are the user reviews.

There isn’t all that much to the Ryse app, but there isn’t that much you can do with a window shade: Open and close on demand, group two or more shades so they can operate simultaneously, or operate them on a schedule. The Ryse app won’t win any awards for its user interface design, but it’s easy enough to use.

As with most retrofits, a bit of tweaking is required to get a Rysed SmartShade to operate exactly the way you want. I suggest using double-sided tape (or something similar) to temporarily secure the SmartShade mount until you get the proper positioning. This way, you won’t be drilling holes until you know everything’s perfect.

Getting that beaded chain taut will not only save your chain from being mutilated by the mechanism, it will also ensure smooth operation. I encountered a bit of stutter if the chain was slightly loose, but that went away once I got the chain as taut as possible. Retrofit solutions are rarely perfect, so I’ll give the Ryse SmartShade a pass on that score. A purpose-built smart shade will always perform better, but they’ll cost substantially more.

The SmartShade is super easy to operate: You can press up and down buttons on the unit itself, but using the app and its smart features is much more convenient. That goes double if you also have the SmartBridge, since it enables you to use voice commands and schedules. As I said earlier, Ryse works with Alexa, Google Assistant, and Apple’s HomeKit. I tested it with Alexa and used simple phrases like like “Alexa, open Living Room Windows,” “Alexa set Living Room Windows to 50 percent,” and so on.

Should you buy Ryse SmartShades?

If your existing chain-operated shades are in good condition—especially if they’re custom fitted to your windows, or your existing shades are very large—the Ryse SmartShade is a brilliant and very affordable alternative to buying new custom smart shades. Installing them is an easy DIY project—professional installation of custom shades can add quite a lot to your final cost.

The benefit/cost ratio is different if you’re looking to automate off-the-shelf shades; you might find that you can buy new off-the-shelf smart shades—with integrated batteries—for less money. That’s particularly true if you’re buying smart shades for small windows. The downside to premade shades, of course, is that they might not fit your windows precisely, especially if you’re looking for shades that mount inside the window frame. You might also find that you have limited color choices.

When you do your calculations, be sure to take the price of Ryse’s expensive batteries into account—unless you really don’t mind cords dangling from your sills. Include the price of the $69 SmartBridge, too; otherwise, you’ll only get Bluetooth control. Fortunately, you’ll need only one of those.

Retrofits are always a crapshoot—especially in an older home like mine. I don’t have one of the popular smart thermostats because my heating system is a millivolt radiator, and I don’t have a smart lock because my front door is from the 1920s. Lucky for me, beaded-chain shades haven’t changed much.