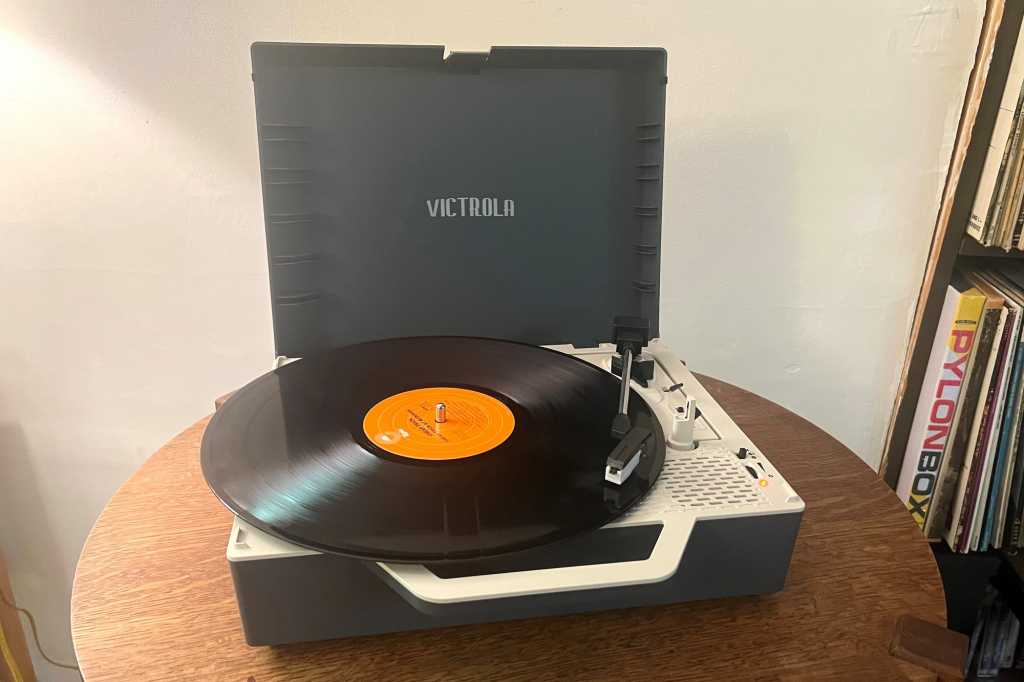 The Re-Spin Suitcase Record Player is an entry-level, belt-drive turntable that delivers a lot of features at a very low price.

Today, you can buy the Victrola Re-Spin Suitcase Record Player for $99. It loses the 16 2/3 RPM speed because, seriously, who’s looking for that anymore? You do get the increasingly rare option to play 78s, however, and the modern unit adds the ability to stream to your Bluetooth speaker of choice—or you can use the unit as a Bluetooth speaker for your phone.

Victrola also touts the fact that this record player is made from more than 25 percent recycled materials and its packaging is 100 percent recyclable. The Re-Spin delivers a lot of features at a very low price, but there are tradeoffs.

What comes with the Victrola Re-Spin?

The new Re-Spin is available in Basil Green, Poinsettia Red, Light Blue, and Graphite Gray. The unit is an incredibly lightweight 5 pounds, something that’s also different than its heavy-plastic 1960s ancestors.

The unit is entirely plug-and-play, with cartridge and stylus pre-installed and no balancing of a counterweight. The tonearm is weighted and balanced out of the box—at least as much as it’s ever going to be.

A switch controls auto-stop. When flipped, the turntable stops spinning when you reach the end of a record. There’s also a speed control that switches between 33, 45, and 78. Both controls have their indicators embossed into the cream-colored plastic. If you’re in less than perfect light, it’s virtually impossible to see what you’ve selected.

There’s a lever to raise and lower the tonearm and a clasp to hold it in place during transport. Users can remove the lid and use it to display up to five albums.

The Re-Spin has a built-in phono preamp and a pair of RCA outs on the back of the unit, so you can use it as a turntable with a receiver or powered speakers. There’s also a headphone jack on the back.

How does the Victrola Re-Spin sound?

I tested the Re-Spin with a thrift-store copy of Cheap Trick’s 1978 album Live at Budokan. The LP had a medium warp that wasn’t so pronounced that I considered passing on the purchase. Unfortunately, the Re-Spin struggled to track the first song on either side of the LP, but it did fine with the rest of the album. Since there’s no way to increase tracking force, you’re limited to what the record player can do out of the box.

Victrola touts its Vinyl Safe speaker enclosure that promises three times more bass than other record players in its class while isolating the turntable itself from the resulting vibration. In fact, Bun E. Carlos’ kick drum and Tom Peterson’s bass did sound much better than you’d expect from the unit’s single mono speaker, and skipping was never an issue. That’s a win for the speaker enclosure.

As I tried to pair a portable Bluetooth speaker, the Re-Spin found my Naim Mu-so and paired itself. Sound quality, as expected, was substantially improved when using that far superior speaker. There was also a significant audio upgrade when plugging in a pair of Sony MDR-7506 wired headphones.

Be warned that there’s a noticeable amount of audio coming directly from the stylus. Even with the volume set to zero on the unit, someone close to the record player will hear a faint, tinny version of the LP coming from the cartridge area. That’s to be expected from a turntable in this class, but it might surprise listeners who aren’t expecting it.

You can also use the Victrola Re-Spin as a Bluetooth speaker. Maybe that’s useful as an emergency backup, but since you’ve already gotten such a bargain with your record player, you should probably consider any one of the dozens of inexpensive Bluetooth speakers out there instead.

Who needs a Re-Spin?

The Victrola Re-Spin is a solid choice if you’re giving a child their first record player. It’s well-made, its built-in speaker sounds reasonably good, there’s no set-up, and it’s easy to stream vinyl to an external.

If you’re crate-digging in junk stores and want to play some worn 78 RPM records, the Re-Spin is an inexpensive and reliable way to explore some ancient history. Of course, the same goes for 45s and LPs. Rather than emphasize its limitations, I’m more impressed with what Victrola has managed to deliver at this price. If you can double your budget, my Victrola Revolution Go review found that portable record player to a better option all around, but the Re-Spin is a solid choice if you’re taking your first steps into the world of vinyl.