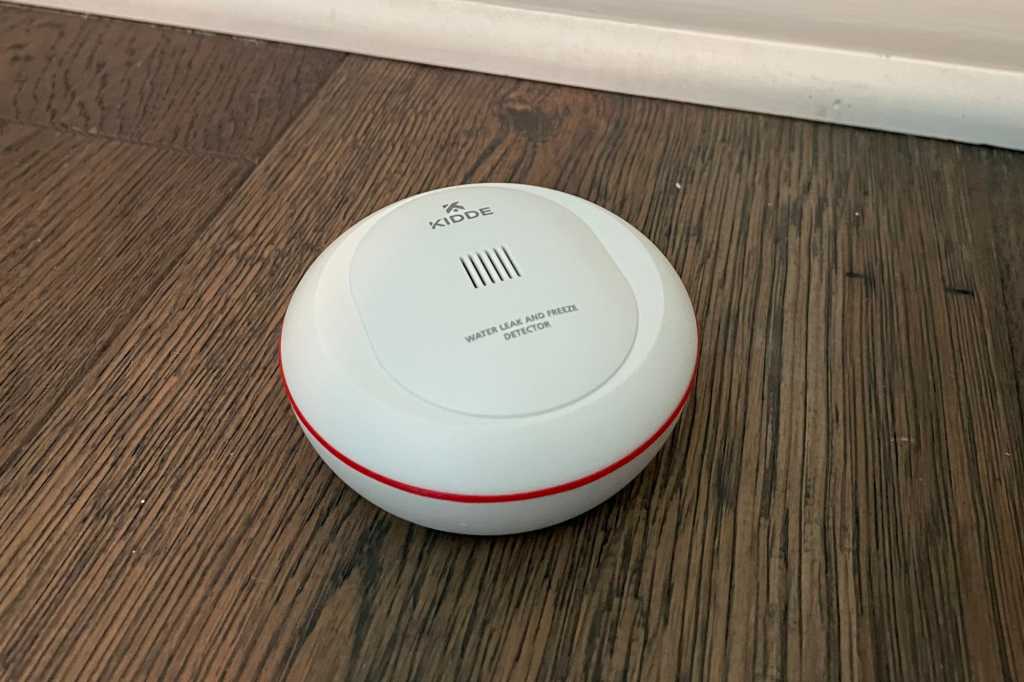 Image: Christopher Null/TechHive
At a glance

These hockey pucks can help you ward off a flood or a freeze, provided you’re home and can take action upon the warning.

Fires get all the press, but water leaks can cause massive amounts of damage, too. USI Insurance says that since 2015, the annual number of homeowners making water-based claims of more than $500,000 has doubled, and claims greater than $1 million have tripled.

With the Kidde Smart Detection Water Leak + Freeze Detector, mitigating water damage risks is as easy as installing a smoke alarm—easier, actually, since these tiny discs don’t need to be mounted permanently.

This review is part of TechHive’s in-depth coverage of water leak sensors.

The concept—and execution—are simple. Install two AA batteries (included), pair the unit via Bluetooth to the Kidde mobile app, and drop the hockey puck-shaped sensor wherever you’re concerned about water or low temperatures. Two contacts on the underside of the device create a circuit when water is detected while an internal thermometer keeps tabs on the temperature.

There are two areas in which Kidde’s leak detector falls short of some of its competitors. First, the water leak must reach the sensor itself. Our top pick and runner-up in this category—the Phyn Smart Water Sensor and the Flo by Moen Smart Water Detector respectively—support extension cables that increase their reach (well, the cable is a $10 option on the Phyn device). Second, both of those competitors can be linked to their respective smart water shutoff valves, which can turn off your main water supply in an emergency, so that a small leak doesn’t turn into a disaster because you weren’t home when it started.

The Kidde device connects quickly after a scan of the QR code on the back, easily bridging to your Wi-Fi network (2.4GHz networks only). Within the Kidde app, you simply assign the unit to a room, drop it into place, and you’re done. The app gives you a real-time look at whether water is detected along with the current temperature, alerting you if either condition becomes dangerous. As with other Kidde smart alerts, these can be delivered via push notification, SMS, email, or any combination of the three.

In my testing, audio alerts were piercingly loud and electronic alerts arrived with reasonable swiftness, although they were a bit slower on the draw than I experienced with Kidde’s smart smoke detectors. In one test, following a brief splash of water, the audible alarm sounded but an electronic notification was never delivered, perhaps because the unit was removed from water contact before the alert could be generated.

Kidde’s app is simple—perhaps to a fault, at times. You’re given a strict list of rooms to choose from when assigning the “room type,” so there’s only one bathroom, one bedroom, and so on. You’ll need to pay special attention to give each device a unique name if you happen to have multiple bathrooms and multiple sensors in the home. Alexa and Google Assistant connectivity features are basic, but at least some semblance of third-party connection is included.

At 3.25 inches in diameter, it might be a little tough to wedge one of these units behind your washing machine, but it’s not egregiously larger than competing sensors. On the whole, I can’t find much fault with the $35 device; just be sure to leave the sensor in a place you can easily get to it for eventual battery replacement. Two AAs will last about a year under “normal” operating conditions.